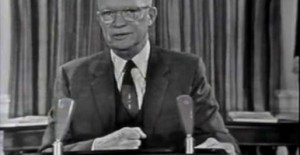 FB is inundated with articles & memes favorably quoting US president Dwight Eisenhower who one source said, “while not a perfect president, gave us a stern warning about the military industrial complex” in his valedictory address leaving office in 1961. They make “Ike” appear not just prescient but politically avant-garde. It’s another case of, if you don’t study history, it’ll make fools of us all.

Our man was a five-star general in WWII, designated the Supreme Allied Commander; he was one of the architects of the Cold War & presided over the rise of NATO & the use of the CIA. His vice-president was Richard Nixon & his secretary of state was John Foster Dulles, both cold warriors of the first magnitude. Schooled in the Eisenhower regime, Nixon went on to incorporate Henry Kissinger as secretary of state. The Cold War, under the guise of fighting communism, involved the US, especially the CIA, in coups & counterrevolutionary campaigns in Latin America, Central America, the Middle East, Asia, & Africa. Kissinger was a logical continuation of all that treachery.

In the US under Eisenhower, the Cold War led to massive repression of civil liberties & flouting of the Bill of Rights. Thousands of people, including teachers, factory workers, screenwriters, were hounded or forced out of their jobs just for being liberal, socialist, or suspected “pinkos.” The political hold of the Cold War was only broken by the anti-Vietnam War movement & by the US civil rights movement.

Just the briefest summary of Ike’s contributions to US militarism: he threatened to use nuclear weapons to end the Korean War; authorized the 1953 CIA & British coup in Iran to install the murderous Shah; authorized the 1954 CIA coup in Guatemala; refused ground troops to aid the French in Vietnam but provided bombers, napalm, & CIA pilots; formulated the Eisenhower Doctrine sanctioning military intervention in the Middle East; sent US Marines to Lebanon in 1958 to buttress a reactionary regime.

It is not that Eisenhower was “not a perfect president” but that he represented the interests of banks & corporations who run this country & he did so admirably–from their point of view. But his policies were violent & undemocratic, strengthening NATO militarism & expanding the secret role of the CIA.

There’s nothing to admire about the guy. The military-industrial meme was a brief moment in a life of international crime & treachery.

(Photo is screen shot of Eisenhower from 1961 valedictory speech)