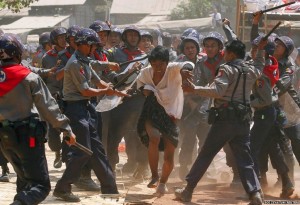 The official narrative about the military dictatorship in Myanmar (formerly Burma) is that it took power in a 1962 coup & dissolved after the 2010 elections when a civilian government took over. We’ve seen that scenario play out in several countries, most notably in Latin America, but after the grotesque deceptions of the military in the Egyptian uprising we should question when & why the military just steps back from direct rule. Sometimes the ruling elite deems the stability of neoliberal capitalism better served by posturing a democratic face while the junta waits in the wings if & when outright barbarism would best serve.

To justify lucrative trade relations with Myanmar after the 2010 elections & the so-called restoration of democracy, the US & European regimes (EU) claimed the human rights record was improved & they pointed to the release of Aung San Suu Kyi from house arrest in 2010. For her political defiance of the junta, Suu Kyi had received dozens of honors including the Nobel Peace Prize in 1991. For obvious reasons, the US & EU didn’t elaborate whether the junta had ceased use of child soldiers, slave labor, child labor, human trafficking, systematic use of sexual violence, torture, or allegations of genocide against the Rohingya Muslims.

Yesterday, hundreds of riot cops attacked students & Buddhist monks protesting a long-disputed education bill that muzzles academic freedom. The protesters had planned to march from Mandalay to Rangoon but were attacked by the cops about 90 miles from Rangoon. Protesters were beaten, dragged into trucks, & carted off to jail.

Officials from the European Union, which has been training Myanmar riot cops in crowd control, issued a statement condemning the violence & deeply regretting the use of force against peaceful protesters. Who the hell do they think they’re kidding!? Since when does the Myanmar military need lessons in crowd control when brute force has served them so well for nearly 20 years?

Suu Kyi is now an elected leading figure in the Myanmar government & wants to run for president. The military connived a constitutional provision preventing her from doing so. This provision should have the entire world scratching its head in bewilderment since no one has been a better servant of tyranny than Suu Kyi since she was released. She sits in the reviewing stands with the generals for military parades. But more significant, she traveled in 2012 to pick up that worthless Nobel Peace Prize while the regime was conducting a brutal ethnic cleansing & forced migration against Rohingya Muslims–& she never uttered a peep of protest.

The 800,000 Rohingya residents of Myanmar have been subject for decades to violent state-sponsored persecution & discrimination conducted by the military, including denial of citizenship (though they have lived in the region for decades), religious persecution, forced labor, land confiscations, arbitrary taxation & various forms of extortion, forced eviction & house destruction, restrictions on travel for health & work, restrictions on marriage, education, & trade. And Suu Kyi, the democracy icon heralded as “the Mandela of Asia,” has nothing to say about that!?

When queried by reporters about the persecution of Rohingya, Suu Kyi responded with platitudes urging people to all just get along & exhortations for the rule of law. Some excused her platitudes as diplomacy & political caution. That was in 2012 but by now her political reputation is irredeemably tarnished. She has refused to speak out against genocide, extrajudicial killings, sexual violence, arbitrary arrest & detention (including of journalists), land confiscation, child soldiers, forced labor, & internal displacement–all documented by human rights groups. Her silence is so deafening regarding the Rohingya & military crimes in the state of Kachin that 23 human rights groups signed an open letter of protest.

No one today would look to Suu Kyi to intervene on behalf of the students & monks assaulted & arrested yesterday. Nobody is puzzled anymore that she refuses to speak out against the violence & human rights crimes of the regime. What’s the point of all those prestigious honorifics or of getting elected to parliament if you have to clam up to get them? But justice is not who she answers to. Sitting in the reviewing stands with the generals & holding smooch-fests with H. Clinton, Obama, & Lagarde from the IMF tell us which side sister Suu Kyi is really on. And in the long-run, she will go down with that junta. Pity that. But it only takes one betrayal–silence on genocide–to go from heralded to heckled.