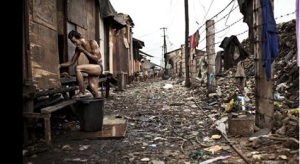 This repost from March 11, 2015 may be worth highlighting in the context of Duterte’s war on the poor. Those his death squads target live in these sub-human urban slums, most of them displaced by rural neoliberal scorched earth economics expropriating farmers & farm workers & replacing them with agribusiness plantations. The war on the poor is a war of extermination because they are no longer useful to capitalism & stand in the way of urban scorched earth policies.
*******
Syngenta is a Swiss agribusiness company (in competition with Monsanto, Dow, Bayer, & Dupont) that produces genetically-modified seeds, herbicides, pesticides, insecticides, fungicides–the entire menu of toxic chemicals they lather on the global food supply. To further its economic interests, it lathers US political candidates & organizations with lobbying money–$1,150,000 in 2012. To promote its image in community service, it’s begun to sponsor an annual photography contest on the theme of “Scarcity-Waste” to address their claim that the world faces “increasingly limited resources.” That claim of course is used to justify population control/eugenics programs & explain away the massive unemployment & immigration rates. They just announced the 2015 winners.

The militancy of many slum residents in the Philippines belies the accounts of the ADB, the public relations factory of the regime, the rancid accounts of slum voyeurs. We stand in solidarity with them & hope that soon working people in more privileged countries will get off their leaden asses & become part of putting an end to neoliberal plunder.