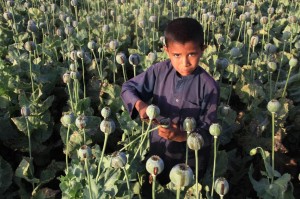 Afghanistan has become the world’s largest producer of opium, the raw ingredient in heroin, & provides between 80 & 90-percent of the global crop. The official line promoted by the UN & US government is opium poppy sales fund the Taliban & criminal gangs in Afghanistan & it’s difficult for the Afghan government to control black-market opium sales or patrol the areas where opium is produced. Like the Helmand province (the epicenter of Afghan opium production) where there are at least 70 US-NATO bases & patrol stations? Where we have photos of US marines guarding the poppy fields & US military planes flying the stuff out for processing? Who’s kidding who!?

It’s reported that while the US has spent $7.6 billion in the last decade to eradicate opium in Afghanistan, land usage for production has increased by 60% since 2011 & opium production is at record-high levels.

Recently it was reported that the private security firm (hired goon squads) formerly known as Blackwater & now named Academi received over $309 million from the US Pentagon to eradicate Afghan narcotics. Northrup Grumman, a manufacturer of bombers & a leading defense contractor, received $325 million. Academi got the largesse for “training, equipment, & logistical support” to the Afghan military for counternarcotics operations. What the hell did Northrup Grumman get it for? Bombing the fields? All that dough, all those bases, & the combined military force of US-NATO, Afghanistan, Academi, & Northrup Grumman can’t stop opium trafficking! They must think the world’s population is comprised of idiots to believe that crap!

Some photos show armed US marines standing guard over poppy fields with children like this small boy picking the crop. So the question must be asked, “Are the children working under coercion? Is the US Pentagon enforcing child labor as well as facilitating opium production?” Sometimes it’s hard to wrap your mind around the malignancy of US war policy, to face the reality that your government is a high-class drug peddling operation. But it is. And worse.

US out of Afghanistan! US out of Iraq! Rebuild the international antiwar movement!