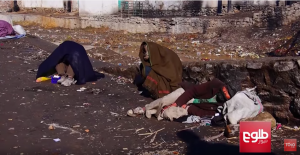 This is winter in Afghanistan & today media showed delightful photos of children playing in the snow near Kabul. There is no war reporting at all from Afghanistan. But US drone & air strikes continue. The conservative estimate for 2016 is 1071 strikes which have killed civilians, destroyed fields, homes, villages, & forced many to relocate.

Many move to Kabul since seeking asylum in Pakistan is now made difficult because of a crackdown by the Pakistani government to force refugees back to Afghanistan.

One of the consequences of the over 15-year-old US-NATO war is massive homelessness. Another which is seldom reported, at least in US or European media, is the growing problem of drug addiction.
This screen shot is from a video news report on drug addicts living under the Pul-e-Sukhta Bridge in Kabul city. The bridge is a well-known place for homeless addicts who live in tents with their families, including small children. They come from every province & some are refugees forced to return from Pakistan or Iran. Many of them, understandably, have mental health problems.

Addicts who were interviewed told the reporter that on average two to four & sometimes more fellow addicts die every day during the winter. The Afghan Ministry of Public Health probably has no idea how many are dying & has not addressed the issue at all.

The addicts explained quite cogently that many whose health is weak & compromised by drugs cannot sustain the subzero temperatures which go down to 23° F / -5° C at night. Many, they said, do not have blankets or tents for shelter.

A large current of the antiwar movement is so absorbed in defending Russia against hyped-up rhetoric over emails & supporting Assad’s dictatorship that they are unable to focus on the real wars US-NATO & Russian forces are engaged in with massive bombing.

Nothing is more imperative than to rebuild the international antiwar movement around principled demands: No to US-NATO wars. No to Russian bombing in Syria. Out now!