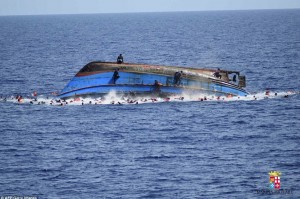 When the history of this era is written, it will be in requiems & laments for the millions who have suffered the unbearable & the tens of thousands who have died for the gods of neoliberal plunder. That’s why this is called the barbaric phase of capitalism.

With European Union navies & surveillance drones monitoring “the world’s deadliest migrant crossing” from Libya to Italy, at least 2,856 refugees have died this year crossing the Mediterranean–the overwhelming majority of them Africans from the Libyan coast.

Just in the past several days, the bodies of 117 African refugees, including children, washed up on the shores of Libya. The photos are too gruesome to show. The crime too unspeakable for words. The racism as monstrous as colonialism.

Those of us who witness all this must speak out massively & publicly demanding that immigration is a human right & that every nation open its damn borders. We must demand the end of wars & the end of sweatshop economics. Because it isn’t history that will grieve, but us. We must let our grief fuel our outrage that human beings have become so dispensable & the sacrifice paid for greed.