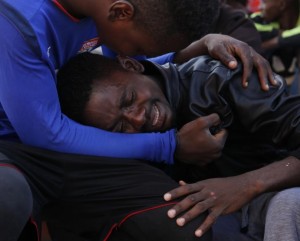 Something may sound cynical when it is really the unvarnished truth. Most people don’t like commentators doctoring up reality for political purposes. So here’s the facts: there continue to be drownings in the Mediterranean Sea despite the presence of EU & NATO navies along with drone surveillance. The UN refugee agency (UNHCR) estimates that in 2016, 2,868 refugees have drowned.

There is almost no reporting anymore on those drownings. It’s probably news to most people that they’re still going on with all those navy ships out there. So it’s curious that on the rare occasions when a drowning dinghy is rescued, it’s all over the news. It’s a wonderful event but how come there aren’t more of them? Are those hyped-up surveillance operations not working right? Do those navies think they’re on a Mediterranean cruise rather than a refugee operation?

Now here’s the confusing part. The UNHCR used to detail how many drowned on the different routes crossing the sea–from Turkey to Greece; from Libya & Morocco to Italy & Spain. But they’ve altered their reporting to give an overall figure & it would be interesting to know why. The suspicion comes to mind that African refugees have the sky-high drowning rate. That’s not a cynical speculation because racism is the very heart of the refugee crises all over the world.

This is a photo from a rescue last Thursday 20 miles off the coast of Libya. The distance from the Libyan coast to Italy’s Lampedusa island where most are headed is 290 miles. Over the years, thousands have drowned on that route, hundreds of them right off the coast of Lampedusa. The mayor & citizens of the island support the refugees & have publicly excoriated the Italian coast guard for bungling rescue operations & letting hundreds drown. They know that because their fishermen have witnessed it.

This young man is being comforted by his friend after being rescued. We should take a moment to look at his face & imagine what he has been put through–not just in the rescue from a sinking dinghy but in the entire journey he has made from his home country. Leaving family, facing dangers & violence on the road, eluding border guards. Many of them are coming with children; many are unaccompanied children. All for the hopes of finding work to make a better life, to make some dreams come true. But he ‘has many miles to go before he sleeps’ because the EU countries are making the continued journey a living hell.