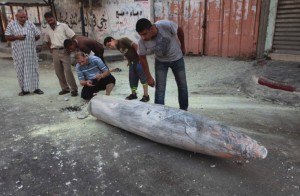 Are these traumatized Israelis examining a Qassam rocket lobbed by Hamas from Gaza? No. It’s documentation of Israeli war crimes against Gaza–& it isn’t the only evidence, which mounts in photo after photo of Israeli aircraft exploding massive bombs over Gazan cities with homes, schools, clinics. These are in fact Palestinians in the town of Deir El-Balah (on the coast of central Gaza) examing a missile dropped from Israeli aircraft.

One would hardly take present international law as a guide to the oxymoronic (with emphasis on moronic) “humanitarian conduct of war”. But Israeli bombing of Gaza violates umpteen international treaties about bombing civilians & civilian property. And it must be remembered, every single person in Gaza is a civilian because there is no form of military & homemade rockets are no form of self-defense against one of the most sophisticated military arsenals in the world.

Deir al-Balah, which has a nearby refugee camp, is a frequent site of Israeli military incursions by land & by air because of its location & because it is a center of political opposition to Israeli apartheid. Israeli bombers & bulldozers have razed acres of orchard land in the area; tanks have occupied the area under the pretext of routing out Hamas arsenals shooting off rockets to Israel. Since in several decades of military incursions in the region Israel hasn’t been able to rout them out, maybe it’s a failed military strategy–or more likely, those arsenals don’t exist & never existed at all.

Deir al-Balah was once a center of Zionist settlements but under the despicable prime minister Ariel Sharon, Israel implemented a disengagement plan in 2005 & forcibly removed the Zionist settlers from Gaza. It now seems evident Israel’s strategy was not to generate peace between Israel & the bantustate of Gaza but to isolate Gaza to more effectively bombard it, ethnically cleanse it of Palestinians, & return it to Zionist freebooters.

Many Palestinian supporters around the world are traumatized watching the carnage & feel helpless to stay the hand of Israeli genocide. Maybe that partially explains why the antiwar movement is so weak: because military power is so daunting & seemingly impregnable. But we must never underestimate the power of resistance, of political education, of persistence. Our strength lies in numbers & in commitment & in steadfast solidarity with Palestinians, Afghanis, Iraqis, Pakistanis, & all others.