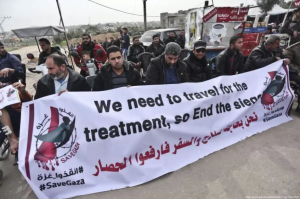 In December 2017, Israeli troops fatally shot & killed a wheelchair-bound 29-year-old Palestinian man in Gaza named Ibrahim Abu Thuraya who was protesting Trump’s declaration about Jerusalem. Palestinian medical authorities have estimated that nearly 44,000 people in Gaza, including children, are permanently disabled, most from Israeli bombing. Ibrahim Abu Thuraya lost both his legs in an Israeli airstrike. There are also medical authorities who say the estimate is too low.

Israel, which treats Gaza as a penitentiary, refuses to allow Palestinians to leave for medical care, including the disabled who require specialized treatment. This is a report about protests by disabled activists demanding they be allowed to seek medical care outside Gaza whose medical facilities have been repeatedly bombed & cannot provide even basic care.