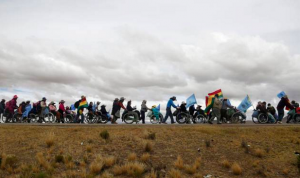 If there’s one continent where left political analysis fails abjectly it is Latin America. Since the ruling oligarchies replaced the brutal military juntas of the 1970s with civilian regimes (without defeating militarism) for more effective rule, many left commentators have become like puppy dogs & are completely uncritical of collaboration between the civilian regimes & neoliberal economic agencies like the IMF & World Bank.

Sycophancy to liberal capitalist regimes leaves so much unexplained–like widespread child labor, including in mines; sweatshops; violations of indigenous rights; expropriations of land & destruction of the environment for agribusiness & mining enterprises; homelessness; police brutality. Bolivia is a case in point. Many left analysts consider it an emerging socialist republic & have elaborated garbled theoretics to buttress that contention. Their theoretics/apologia can’t explain the massive problems.

There are all sorts of adages about how one judges the character of a society, from how it treats women to how it treats animals. All of them hold force, but how they treat children has to rank par excellence. So how do the left commentators explain child labor in Bolivia & attempts to unionize & legitimize it rather than outlaw it as an abomination of human rights for children?

How do they explain why for a few years disabled people have repeatedly marched nearly 200 miles on a highway to La Paz–facing police violence–to demand an increase in their state benefits from a paltry 1,000 boliviano (£102, $144) a year to 500 boliviano a month?

Some people age out of the fight for social justice but that doesn’t give them the right to go all Panglossian & declare this the best of all possible worlds. Not as long as millions of children are in sweatshops & fields & people in wheelchairs have to fight to survive.

This photo is the latest protest of disability activists in Bolivia who marched in wheelchairs & on crutches to La Paz.