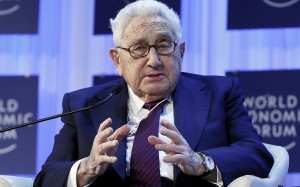 There is probably no living figure in world politics more loathsome, contemptible, ruthless, amoral, criminal than this lowlife. He’s ugly all the way to the bone & comparisons to repugnant animals are only unfair to the animals. His political history is nothing but killing fields on every continent.

Those who associate with him & pay homage to his leadership, including Obama & Hillary Clinton, tell you everything you need to know about their real view of politics: realpolitik in the coercive, amoral, Machiavellian sense. Now Dilma Rousseff, the president of Brazil, just met with Kissinger in NYC & called him a “fantastic person, with a grand global vision.” She also met with Rupert Murdoch & a number of bankers & CEOs, likely shilling for more neoliberal investment in Brazil.

When millions of people protested in 2013 against austerity in Brazil, including thousands of Indigenous peoples fighting back against multinational land grabs, when riot police brutally occupied favelas, leftist activists of the Stalinist tradition circulated slanderous accusations that the movement was led by fascists. And when protests erupted again recently, publications like NACLA published articles claiming protestors were the well-heeled rebelling against her reforms. Many activists who don’t follow politics in Brazil, even around the World Cup & Olympics games, bought that crap; & more were confused.

Perhaps the next time they vilify popular movements of rebellion against neoliberal austerity, land grabs, environmental disaster, usurpations of Indigenous rights, people will ask more probing questions & not be taken in by political piss-heads with an agenda of conforming to the status quo & groveling for every double-talking politician that comes down the pike.

This isn’t the first time social movements have been slandered in that way. A similar thing happened during the Hong Kong democracy movement last year & the Syrian revolution against Assad’s tyranny was vilified.

Rousseff has exposed her hand in a way that cannot be denied. But be certain, there are those that will try.

(Photo of the creep by Pascal Lauener/Reuters)