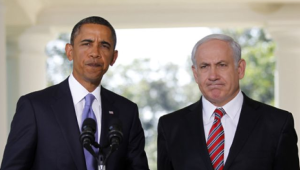 The contentious relationship between Obama & Netanyahu is portrayed as differences over Israel’s aggressive settlement policies. That’s how Obama explained it even though Netanyahu is known to be irascible & difficult. Despite provocative & pissy behavior from Netanyahu, Obama understood what was at stake in the relationship between Israel & the US & conducted himself like a professional politician. Unlike Trump, more narcissist than politician, who thinks he can prevail on social familiarity with Bibi. Trump is a moron & will learn the hard way what is at stake & why sweet-talking plays no part in US diplomacy on that score.

As for those policy differences between Bibi & Obama? Last year, under Obama, the US signed a deal for $38 billion in military aid to Israel for the next ten years, the largest military assistance package in US history. To see the extortionate scale of that aid, Israel is roughly the size of New Jersey, the 5th smallest US state.

What is the military aid to Israel for? To maintain the brutal occupation of the West Bank necessary to expand settlements on Palestinian lands & for periodic bombing offensives over Gaza. But the US also bankrolls Zionist settlers moving from the US to Israel. In 2015, the Obama administration said in the previous 6 years of his tenure, he had authorized $140 million to cover travel expenses for Zionist settlers from the US & for transitional shelter, Hebrew-language courses, & youth programs in Israel.

The US does not disagree with Israel over apartheid & ethnic cleansing nor about expanding settlements in the West Bank or bombing of Gaza. It not only bankrolls Israeli colonialism but it brokered the Oslo Accords which laid out the terms of Palestinian surrender & the means to accomplish a Jewish-only state through ethnic cleansing.

Where the US differs with Netanyahu is on the pace & public presentation of Israeli colonialism. Netanyahu recklessly vows outright that there will be no Palestinian bantustates in Gaza & the West Bank. The US thinks it injudicious to be so forthright because it strengthens Palestinian resistance, BDS & the international solidarity movement.

Trump is not going to sweet-talk Netanyahu out of his recklessness. Palestinian Intifada strengthened by BDS is the decisive difference.