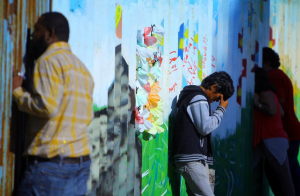 One of the issues never sufficiently elaborated is the impact of immigration on families: the separation of parents from children; children’s sense of abandonment; not being able to attend family members who are ill or who die for lack of papers to travel; losing family members en route by being separated from them or from capsized boats & other hazards.

There are many stories of Central American & Mexican children left behind by parents who became undocumented immigrants to find work. Many of those bereft children travel as unaccompanied minors to reunite with their parents even if they don’t know where they are in the US. Most will end up in US detention facilities. If they are reunited with parents who often had more children here, the older kids will have unresolved resentments to work out. Thousands of undocumented immigrants deported under Obama are separated from their children who are placed in a dysfunctional, bloated, & sometimes dangerous foster care system.

These people are on the Tijuana, Mexico side of the barrier wall between Mexico & the US talking to relatives on the US side near San Diego. The young man shows the poignancy of these separations caused by barbaric & racist immigration policies.