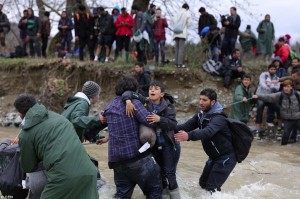 Today about 2,000 refugees trapped for days in squalid conditions in a muddy, disease-ridden camp at Idomeni, Greece, marched en masse about 6km/4mi carrying children, even pushing someone in a wheelchair, to ford the Suva Reka river in thigh-high water to reach a gap in the barbed wire border fence with Macedonia.

They used a rope & formed human chains to steady themselves against the raging current because the river was swollen from days of heavy rain. Three refugees, including a pregnant woman drowned.

As soon as they made it across, they were surrounded by Macedonian soldiers, rounded up into military trucks, & deported back to the camp in Greece.

Just how long does the EU plan on holding thousands of people in a state of living hell? The civilized mind reels at the barbarism. EU officials consider the thwart a good days work.

One curious aside is that 30 journalists who followed the refugees were detained by Macedonian authorities & fined €500 each for breaking the law & illegally entering the country. All those reporters but so little media publishing their accounts.

Photo is refugees crossing the river.