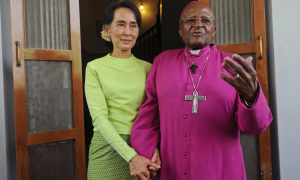 Archbishop Desmond Tutu, addressing the Burmese face of genocide as “my dear sister”, issued a public rebuke to Aung San Suu Kyi saying: “If the political price of your ascension to the highest office in Myanmar is your silence, the price is surely too steep.” It’s a moving appeal but about five years behind events. Suu Kyi has by no means been silent on the genocide against the Rohingya people but has repeatedly mocked the accusations of Rohingya in public interviews & forums abroad as she tries to drum up investments in the Burmese economy. She ridiculed the claims of mass rape by the military; she denies visas to UN & human rights monitors to enter Arakan state. That is not silence. It is collusion.

This photo of Archbishop Tutu & Suu Kyi was taken in Yangon in 2013–one year after the genocidal military assault on Rohingya that sent tens of thousands fleeing for their lives.

(Photo by Than Win/AFP/Getty Images)