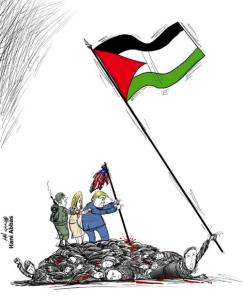 It’s right to blame the Republican nitwit in the White House for the Trump embassy massacre but Democrats are equally culpable. The ambassadors to Israel under Clinton & Obama are both tweeting their support for moving the US embassy to Jerusalem & both are blaming Hamas for the massacre. Clinton’s ambassador Martin Indyk tweeted that “Israel needs to change live fire tactics or Palestinian demonstrations will grow & spread.” No objection to the slaughter but only fear Palestinian resistance will grow! Obama’s ambassador Daniel Shapiro tweeted that “I wish Hamas leaders valued Palestinian lives as much as they value their rockets & tunnels.” What Hamas rockets & tunnels? The protests for the past several weeks have been entirely peaceful & involved children. There wasn’t a rocket in sight but only Israeli snipers & tear gas drones. Democrat Bernie Sanders was endorsed by Assadist halfwit Rania Khalek in Electronic Intifada & by hundreds of Palestinian supporters during the 2016 election campaign. He tweeted “Hamas violence does not justify Israel firing on unarmed protesters.” What Hamas violence? It is absolutely & criminally detestable that they refuse to condemn Israeli snipers for firing on unarmed Palestinian protesters & instead try to make the narrative about Palestinian terrorism. “Hamas” is a code word for terrorism.

(Cartoon is by Hani Abbas via Shehab News)