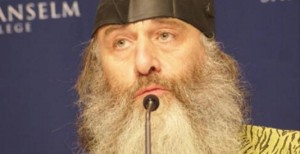 Finally a candidate has entered the presidential campaign who brings dignity to what has become a comic travesty & mockery of democracy. According to CBS News, Vermin Supreme placed fourth as a Democrat in the New Hampshire primary last night, with 200 votes.

Some claim our man Vermin is a political satirist & not a serious candidate but who would dare say that with a straight face after viewing the Republican line-up? Or after listening to one of Trump’s speeches? Or after watching Clinton & Sanders play the populist card? Incidentally, someone ought to analyze Trump’s use of hand gestures. There’s some derangement going on there.

Vermin, who campaigns with a massive boot on his head, has a straightforward four-point program: mandatory tooth brushing laws; time travel research; zombie preparedness to defeat the “zombie apocalypse” he says is coming; & a pony-based economy which would give free ponies to every American. When asked how he would defeat ISIS, he said his plan included, “Lots of ponies–pony bombs, pony drones, pony tanks, pony troops, hoofs on the ground, boots on the head. We are going to take them on.”

This is Vermin’s third run for president but first time as a Democratic candidate. We cannot call for a vote for him on that score alone but also because he demanded of Ted Cruz that “terrorists be waterboarded with fluoridated water.” As much as we detest the politics of Clinton, Sanders, & the entire GOP line-up, we cannot approve of waterboarding them. We prefer due process prosecution & life sentences at Fort Leavenworth federal prison.

(Photo is Vermin Supreme on the campaign stump)