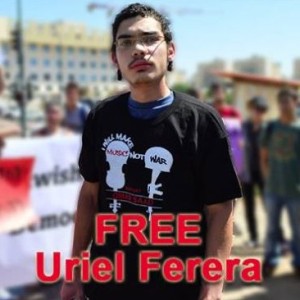 This is the defense case of Uriel Ferera, a young Israeli man jailed & placed in solitary confinement for refusing to serve in the Israeli military because he opposed discrimination against Palestinians within Israel & the occupation of Palestinian lands.

Ferera is a harbinger, part of the advance guard among Israeli youth turning against the fortress of Zionist apartheid. Active solidarity with him is imperative. It serves first to protect him from worse punishment by the Israeli regime & secondly, to strengthen resolve among other Israelis who object to apartheid but are afraid to stand up because of punishment & ostracism. We should never underestimate how terrifying such commitment to justice can be; it proved hard enough for antiwar soldiers in the US Army whilst there was a massive antiwar movement & much more so in a militarized society like Israel with very weak antiwar opposition. Simple acts of solidarity show them they do not stand alone.

This link suggests several easy ways to extend support to Ferera. Please take a moment to send an email voicing your objections to his incarceration, putting the Israeli regime on alert that their conduct toward him is being watched, & expressing your support for this courageous, principled, & admirable young man.

(Photo is of Uriel Ferera from his FB wall)