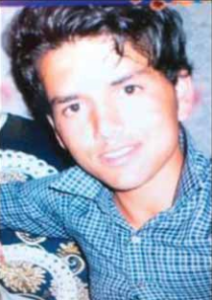 One cannot write an obituary for every one of the 105 people killed in the past 77 days of the siege in Kashmir–though Kashmiri activists on social media have not let any pass without paying respect & mourners defy curfew to hold funeral prayers/protests in their honor.

The murdered were not all youth nor protesters. Some were in their homes, some in fields, some just near by. Most were protesters committed to Kashmiri freedom.Testimonies about them show them to be the best humanity is made of–like the testimonies about those killed in the US Black community or in the West Bank & Gaza.

This is the story of 19-year-old Hilal Ahmad Dar executed by a paramilitary thug on his way home from getting medicine for his 8-year-old brother Zubair, who described what happened. It exposes the lawlessness of military occupation.

(The article doesn’t identify whether this photo is of Hilal or Zubair. Perhaps someone who knows can let us know.)