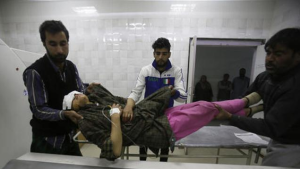 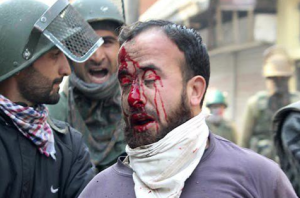 Day 117 of the military siege in Kashmir: almost four months of a brutal siege & the Indian army shows no sign of backing down. Nor do the freedom fighters. Thousands continue to protest; hundreds of youth are being targeted for arrest; hundreds continue to be injured, especially by the use of pellet guns.

This injured woman from Pulwama (top photo) in southern Kashmir is being admitted to hospital in Srinagar. Several were injured in that protest by pellets & tear gas, including three young girls partially blinded by pellets who, according to their families, were not part of the protests. As Mirza Waheed tweeted, “Now we talk about blinded young Kashmiris as though it’s the norm.”

Yesterday, residents of Anchaar & Soura, districts of Srinagar, protested when occupying forces went on door to door searches to arrest youth. “We didn’t allow the forces personnel to enter our homes,” a group of residents said. In that protest, 40 civilians sustained injuries, including a 70-year-old man battling for life after being struck in the head by a tear gas canister & four young people with serious pellet injuries to the eyes. This man (bottom photo) is one of the other 35 residents injured in the protest.

This is also Day 49 of the incarceration of human rights leader Khurram Parvez. Those who haven’t already can show solidarity by liking & sharing his defense page: https://www.facebook.com/freekhurram/?fref=ts

End the occupation. End the siege. Self-determination for Kashmir.