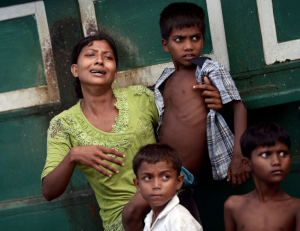 In modern politics, culture is a battlefield, not neutral territory. We’re not just talking rock & roll concerts in Tel Aviv but the literary festivals which are cropping up all over the place, especially in the most oppressive countries. Literary festivals are less intellectual salons where writers get together to schmooze about poetry than market places where writers scout publishers & book sellers. No problem with that unless the gathering is intended as a cultural event to whitewash crimes of the sponsoring regime.

Burma has not missed the uses of a literary festival. In 2013, the Irrawaddy Literary Festival was founded by Jane Heyn, wife of a former British Ambassador to Burma, with Aung San Suu Kyi as its public sponsor. It’s been held every year since & will be held again November 3rd to 5th. It’s received all sorts of prestigious media coverage with blithering about the new openings for writers & the new spirit of democracy in Burma despite the genocidal offensive against the Rohingya during several months of 2012. The sponsorship of the festival speaks more to a whitewash of that genocide than to democracy & free speech in Burma.

The Irrawaddy festival is a UK registered charity claiming to have “entirely philanthropic goals.” It’s partnered with several Burmese businesses but since the entire economy of Burma is run directly by the military or indirectly through minions or relatives of the military, the Burmese junta carrying out the genocide of the Rohingya is the core sponsor of the event. This is made crystal clear by the sponsorship of Max Myanmar Holdings & KBZ Bank, both enterprises directly associated with the highest echelons of the military. Manchester Metropolitan University in the UK & the University of Melbourne, Australia are educational partners in the festival this year. It comes as no surprise that universities would compromise themselves with genocide but hopefully when students at those schools get wind of it, they will rise up with a tremendous clamor to oppose it. The corporate sponsors include British Airways & Coca Cola which has a $200 million investment in Burma. The US embassy in Burma is also a sponsor of the festival this year. So when US officials like Nikki Haley, Mike Pence, & Rex Tillerson make objections to genocide, we know it’s only ceremonial.

The website to the festival boasts that former British diplomat William Hague once said the Irrawaddy festival “achieved more for freedom of speech in one weekend than most of us manage in a lifetime.” Actually Burmese writers haven’t found that to be true since in 2014, 50 poets boycotted it for being too controlled by the military & dominated by writers who collaborated with it.

There’s a lot of rubbish spewed by writers & organizers of these literary festivals to justify attendance in countries with serious human rights violations. Kavita Bhanot, who organizes them in India to earn her living, offered the most sophisticated rationalization: “I don’t believe this is a valid concern for western countries who are themselves violators…of human rights. Such a focus & framing tends to serve the purpose of pathologising & demonising other countries & peoples, often Muslim, often in order to justify imperial aggression.” That would be sophisticated in the sense of sophistry. More colloquially, it’s called a crock.

Kashmiris gave the best response when India tried to organize an “apolitical” literary festival there in 2011. Kashmiri writers boycotted it & political activists excoriated it for feigning to be apolitical in a heavily militarized conflict zone. They forced the thing to cancel. When India again attempted to organize an “apolitical” literary festival in 2015, human rights activist Khurram Parvez laid it out: “If it does not highlight the pain & truth of Jammu & Kashmir, it’s not apolitical. The organisers have claimed that the events are apolitical. We, as Kashmiri stakeholders, have a fundamental problem when the show is organised in collaboration with the government, which is aimed at promoting the problematic political agenda of fascist & tyrannical military occupation. The state requires a true & honest space for literary festivals & other programmes which promote the voices of victims, pain, resistance & those which have been deliberately silenced.” And there you have it when it comes to literary festivals organized by fascists!

The photo is Rohingya refugees on a boat drifting in Thai waters in the Andaman sea. Thai planes are dropping food packages in the sea so that starving refugees have to swim for it. These are the voices being whitewashed by events like the literary festival run by the junta.

(Photo from the Independent)