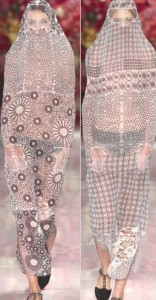 This is what you call cultural appropriation–& in the era of Islamophobic hysteria, it is a political affront. The outfits are by Israeli designer Sasha Nassar who won the International Womenswear Prize for the full collection in 2013. Haaretz called Nassar “the Jaffa-born designer with an Arab spring in her step” because she claimed her designs were inspired by the Arab uprisings.

In the florid (not apparently intended to be snide) description of the Haaretz reviewer, Nassar was inspired “by motifs borrowed from Muslim culture, into which she also incorporated Arabic numerals that represent the dates on which protests erupted in Arab countries.” The reviewer added that the collection “can be seen as representing the transition from a traditional Muslim garment to contemporary Western-style clothing, with all its fashionable & seductive elements.”

The judges of the prize say they were “captivated with the investigation of contemporary cultural conflicts that Sasha played with veiling & unveiling, muslim & European motifs.”

The collection can be seen as transitions & investigations & inspirations but that’s only if fashion operates in a hermetically sealed universe where the burqa is not used as a political weapon to justify bombing entire countries to smithereens or to persecuting & denying civil liberties to Muslim women or to denying refugees asylum.

Whether Nassar or the judges understood it intellectually & politically (a doubtful speculation), on a visceral, intellectual, & political level this fashion collection is an affront to Muslim women–in particular those women wearing burqas in Egypt, Bahrain, Yemen, & elsewhere who were leading the Arab uprisings for democracy.

Diaphanous is lovely; it’s hard to go wrong wearing it to the prom or at a swanky beach party. But when it’s used to mock women who led the most momentous events of the past several years or Palestinian women opposing Israeli colonialism & apartheid, then it becomes cultural appropriation with sarcastic & malignant intent.

(Photo from runway in Vogue)