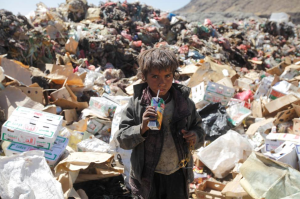 Cruise missile emancipation: This is the kind of “liberation” you get with militarism & bombers. The little guy is scrounging through landfill outside Sana’a, Yemen. The US has been drone bombing regions of Yemen for several years but the Saudi coalition, armed by the UK & US & militarily supported by the US, took over in March 2015–primarily to destroy the glorious & massive 2011 popular uprising against dictatorship & replace it with cruise missile democracy.

This is all under the humanitarian regime of Obama, now touring Europe to reassure right-wing nationalist leaders that the US will remain committed to the highest ideals of civilization under Trump. Meaning it will not neglect its commitments to militarism & cruise missile emancipation.

Hospitals, mosques, schools, residential areas, funeral wakes, wedding parties have been bombed to smithereens in Yemen. There are no reliable estimates of civilians killed in the bombing but it is now several thousand, including children. There are also no reliable estimates of the number of war orphans but relief agencies say it is tens of thousands. Bombing has displaced & made homeless 3.2 million people; 370,000 children are suffering severe malnutrition, not helped by the cholera outbreak in October or the bombing of hospitals & medical facilities. This little boy who is still alive & found an old juice container in the landfill is among the lucky ones.

Meanwhile Assad supporters are exuberant at what they call the impending liberation of east Aleppo & other Syrian cities by Syrian & Russian bombers. They can’t explain how the Russian bombing of five hospitals & the central blood bank in Aleppo in the last 48 hours fits into that scenario of liberation. So they denounce mainstream media for lying & deny it ever happened.

There are no freedom fights fought by bombers. That’s the deranged, right-wing pipe dream of those who do not believe in the power of working people to accomplish their own emancipation from dictatorship. Regrettably their delusions are not shared by those who operate the bombing fleets.