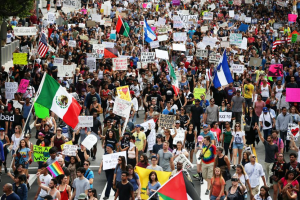 Since the election last Tuesday, tens of thousands of protesters across the US & in other countries have been protesting against the politics of Trump. One of the most notable & significant components of the protesters are high school students who continue to walk out of school in protest. Their banners demand Black, Latino, Indian, women’s, immigration, LGBT rights & an end to targeting Muslims.

Anyone with an elementary sense of decency is proud & grateful that young people in particular are standing up against the politics of social hatred rather than sit on their asses or cower in terror.

So it must seem deranged to many international observers of US politics that so many people here are posting scurrilous denunciations of the protesters. At first the critics sniffed at the young people because they didn’t protest Obama’s wars. That’s because they couldn’t get their babysitters to take them to the protests or because their grade school teachers were bigger than them & wouldn’t let them out of school.

When that nonsense bottomed out, the crazy-pants element took up the charge against the protesters, denouncing them as ‘Soros-funded anti-democracy mobs & rioters pushing for a coup.” They claim the left & those damned liberals have ‘abandoned the working class who voted Trump into office when we should be supporting his pro-worker & antiwar positions’ & stop substituting identity politics for class. By identity politics, of course, they mean Black, Latino, immigrant, women, Muslims who feel most threatened by Trump’s fascistic threats & are marching to say hell no to that crap.

Then the accusers throw in the kicker: the protests are a regime-change operation by Clinton forces. It should come as no surprise that those making these surreal accusations are Trump supporters who probably don’t so much pretend as actually believe they are progressives. They complain they don’t want to be marginalized as crackpots & we can go along with that, & even acknowledge their sanity if they will face up to their stinking rotten reactionary politics. Either they’re crackpots or they’re right-wing. Or are they part of that alt-right thing?

Do you think it might be relevant that those slinging this nonsense around to discredit protesters also support Assad’s dictatorship; don’t just support but enthusiastically cheer Syrian & Russian bombing of civilians; see US intervention as a regime-change operation in Syria; ignore Rodrigo Duterte’s human rights crimes & support him because he talks trash to the US; think the Arab uprisings & most mass protests are CIA & Mossad operations?

Do you think it possible that right-wing people actually believe they are progressive? Hopefully they’re just nuts.