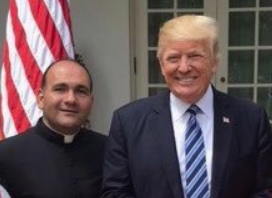 Facts you won’t know if don’t watch Fox news: Christians worldwide are enduring the greatest genocide of all peoples since the French Revolution in 1799. This genocide is not reported in the news (except by Assadists on Syria) but Fox got it on the word of a Lebanese priest named Andre Mahanna who grew up near the Syrian border. He claims his family escaped religious persecution (under Hafez, father of Bashar) by living in caves. That’s probably why he doesn’t know about the persecution of Jews under Hafez Assad. He emerged from the caves at the age of 12 to enter a monastery in France, & then moved to the US in 1999 at the age of 23 to sound the alarm of the Christian genocide in the Middle East. No need to ask who the bad guys are in his scenario: Muslims, of course. He now preaches from a pulpit in the mountains of Colorado where he probably still lives in a cave like the wild boy of Greeley yodeling to the mountain goats. Until a Fox News affiliate picked up his yodeling against Muslims on a talk show by the local Catholic bishop.

Lest you think him a deranged voice crying in the wilderness, it was only a few years ago that Pope Francis claimed there are more Christian martyrs in the 21st century than were killed under Roman emperor Nero 950 years ago. After Nero set Rome on fire in 64 AD he blamed it on Christians & apparently arrested & executed some but historians don’t report how many. Nero died in 68 Anno Domini, only 35 years after Jesus died, so there probably weren’t that many Christians & most of them lived in the Middle East, not in Rome. Do the math, Pope Francis.

The Vatican claims 70 million Christians have been killed due to their faith since the time of Jesus & are being killed now at the rate of 90,000 to 100,000 every year “partly by other believers.” “Other believers” must be code for Muslims & Jews but with that ecumenism thing it wouldn’t be diplomatic to spell that out although the pope does locate it in the Middle East. Could it also be ‘partly’ by women exercising their reproductive rights & using birth control or abortion? Come clean here, Vatican. Do you include birth control & abortion statistics in your crazy-assed statistics? If in fact, Christians were subject to widespread genocide, that would be a matter of concern. But even if it were 70 million since the time of Jesus, that is dwarfed by the colonial slaughter of millions of non-Christians just in the past 600 years which is well over 100 million people. It is political derangement to claim Christian genocide today when it is overwhelmingly Muslims who face persecution, war, occupation, genocide. After Pope Francis went to Burma during the genocide of the Rohingya people, banqueted with the genocidaires, & didn’t utter a peep of moral or political outrage, his judgement about what is & is not genocide might not be of any value whatsoever.

Photo is Fr. Andre Mahanna with Fr. Trump, missionary to the godless strippers.