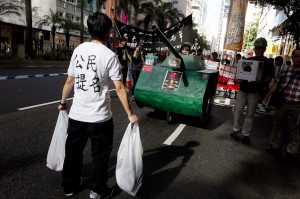 Protesters in Hong Kong re-enact the iconic moment on June 5th, 1989 when an unknown democracy protester, now known as Tank Man, squared off against a column of tanks in Tiananmen Square, Beijing. This year is the 25th anniversary of China’s violent crackdown on the democracy movement when soldiers opened fire on unarmed protesters. An estimated 10,000 were injured; hundreds were arrested & imprisoned. The death toll is still a matter of dispute, depending on whose political interests the estimators serve. The Chinese government claims 241 died but other estimates go as high at 6,000. Tiananmen Mothers, a victims’ advocacy group, has documented 202 deaths as of 2011.

No one knows who Tank Man was or what became of him but he remains a symbol of fearless opposition to tyranny. There are other such figures, like Faris Odeh, the 15-year-old Palestinian boy who faced off with rocks against an Israeli tank in Gaza in 2000. Ten days after the iconic photo was taken of him, he died from a shot in the neck by Israeli troops. And there is the image of the Kashmiri boy who stood with rocks against an Indian tank after his friend was killed by Indian troops. These individuals inspire us because they represent the intransigence of millions around the world in the fight for democracy & justice.

This symbolic re-enactment is preparation for the annual candlelight vigil which will be held June 4th in Hong Kong. It must be said that the political movement in Hong Kong is a model for making historic memory part of the struggle for democracy today. Our fullest respect for their work.