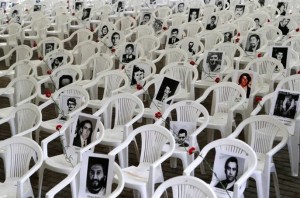 This is a post I wrote in 2013 commemorating the two 9/11s. Little has changed in that time except the president of Chile & in July a Chilean judge ordered the arrest of seven army officers under Pinochet for questioning about the 1986 torture of Rodrigo Rojas & Carmen Gloria Quintana who were doused with petrol & set on fire. Being hauled in for questioning is not the same as being prosecuted & incarcerated for monstrous crimes–& it leaves thousands of other murders & crimes unaddressed.

I do not mean to slight the victims of the the US 9/11. May they RIP because they & their survivors have not received justice either–especially because the attack on the WTC is used to justify the 14-year war against the people of Afghanistan.

The common denominator in all these crimes in the US government. The only way to halt its international crime spree is to rebuild the international antiwar movement expressing solidarity with all who have suffered so much for so long.

There are two 9/11s to be commemorated: the US-backed Chilean coup in 1973 & the attacks on the World Trade Center towers in 2001. No one with all their marbles intact denies the horror of 2001 but the tragedy is smothered in US war apologetics, anti-terrorist hysteria, & drone assaults while the carnage of 1973 is ignored to cover for the barbarisms inflicted on the Chilean people with the direct involvement of the US under the tutelage of Henry Kissinger. The official death estimates for both events are about the same (3,000 +) but guided by his conviction that “Sometimes democracy must be bathed in blood” & trained in death squad terrorism by the CIA, Pinochet’s military initiated a reign of terror that disappeared over 10,000 people & killed, tortured, or imprisoned over 40,000. Over a million fled into exile.

Volumes of idiocies have been written trying to justify the barbarisms of Pinochet’s rule by deference to what Milton Friedman called “The Miracle of Chile.” The so-called miracle is the imposition of neoliberal economics that halfwits & economists who sing for their supper claim transformed Chile from one of the poorest countries in Latin America to the second wealthiest on the continent. The string of five regimes following the end of direct military rule in 1990 have left not only Pinochet’s constitution but also his neoliberal economic policies intact–partially because they agree with the policies (& are enriched by them) & partially because they’re afraid of poking a stick at the military still waiting in the wings.

The economic model installed by the military junta was classic neoliberalism which opened the country to foreign plunder & enriches a few at the expense of working people. In their relentless opposition to neoliberal education policies (making higher education out of reach for most), Chilean students have exposed the massive fault line between the classes as a result of neoliberalism–which is the barbaric phase of capitalism.

Current Chilean president, Sebastian Pinera, talks out of both sides of his ass in addressing Pinochet’s legacy as the forces of justice close in on his regime which includes many figures who collaborated with Pinochet. Military officials, judges, & politicians are now apologizing for their roles in the dictatorship & asking for forgiveness. Well if it’s forgiveness they want they can go to a priest for confession. Justice demands coming clean publicly & prosecution in a court of law. A handful of pathetic “mea culpas” or one Our Father & three Hail Marys in contrition doesn’t cut it & mocks the tens of thousands who were murdered.

One of Pinochet’s most ardent defenders was Margaret Thatcher, the “Iron Lady” of Britain, now thankfully rusting in peace. With allies like Kissinger & Thatcher, Pinochet went to his grave without prosecution but once again his victims still haunt justice. These photos of his victims are displayed at a ceremony to commemorate 40 years since the coup at the Parque Por La Paz (Park for Peace) on the grounds of the former Villa Grimaldi torture center in Santiago. Of course justice will not be fully honored until all those involved in these unspeakable crimes against the Chilean people are exposed & prosecuted–even postmortem.