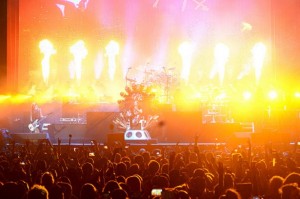 This weekend, over 200 thousand music fans converged near Palm Springs in the Coachella Valley (about 130 miles south of Los Angeles) for the annual Coachella Music Festival, considered one of the world’s premiere music festivals. Concert tickets range from $400 to $3,000 & the concert rakes in about $84 million a year. The western part of Coachella Valley–now one of the fastest growing areas in the country–has been a resort haven for millionaire movie stars & retired presidents since the 1920s & has become a haven for retired northerners during the winter months.

Only 25 miles away from the concert venue, Eastern Coachella Valley is one of the richest agricultural areas in the US drawing on the labor of up to 30,000 migrant farm workers during the growing season.They produce strawberries, mangoes, grapes, bell peppers, eggplants, seedless watermelons, & the majority of the dates grown in the US.

Homelessness is a major problem because no housing is provided for migrant workers so most are forced to live out of their cars, on the streets, or in makeshift housing using duct tape & cardboard. There are many illegal, unregulated trailer park rentals which provide squalid housing for the 30,000 permanent residents & some migrants. Built on county lands (called unincorporated communities), these trailer parks lack sewage systems, clean drinking water, storm drains, trash pickup, & even power. As a result, residents are plagued by contaminated water & raw sewage backing up in the shower, overflowing in the streets when it rains, stagnant, contaminated pools in their yards. Children play in this raw sewage with rat, mosquito, & cockroach infestations.

Residents attempt to treat these problems, which the state ignores, by flushing sewage into septic tanks & cesspools (which overflow regularly), by pouring bleach into sewage pools, by digging private sewage pits. But they suffer from many public health problems including gastrointestinal illness, respiratory disease, skin infections, & other health problems in an area not served by public health facilities. This racist neglect by the state means those strawberries, mangoes, grapes, peppers, eggplants, watermelons, & dates sold in supermarkets around the country are grown in the surrounding fields fertilized by untreated sewage.

Certainly the most disgusting of all the environmental outrages in the area is what has been termed “Mt. San Diego”, a 50-foot high mountain of human poop dumped by San Diego on nearby Indian tribal land from 1989 until 1994, when a federal court ordered an end to the racist practice. Particulates from the feces mound are dispersed by desert winds to the dozens of communities just a few miles away & emit a noxious stench impossible to shut out. The area is also surrounded by illegal dumps of toxic materials.

Although the labor of migrant workers generates the enormous agricultural wealth of California, their conditions of life have been in this bereft & squalid state for generations, existing right next door to lavish wealth. In Coachella Valley, one has to drive through upscale golf courses where celebrity tournaments are played to get to these impoverished hell holes where mostly Latino Californians & migrant workers live. If the stench was near enough to affect the golf games, that pile of human manure would be removed forthwith by the state.

(Top photo is a scene from Coachella 2016 by Kevin Mazur/Getty Images; bottom photo is 7-year-old child playing in raw sewage flowing from the trailer park where he lives to the adjoining farm fields by Max Whittaker)