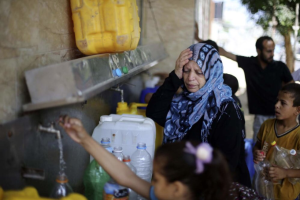 Clarifying the distinction between anti-Semitism & anti-Zionism is always imperative. Persecution & pogroms against Jews were a major historical problem for centuries, culminating in the WWII holocaust of six-million. It was a different political phenomenon but of a piece with colonialism which treated black & brown peoples around the world with unimaginable savagery. What makes the holocaust seem more monstrous is that it was carried out by colonial powers on mostly white people (the exception is the holocaust of Roma) in the metropolitan centers of Europe. The struggle to end persecution & violence against Jews was & remains part of the struggle against colonialism–the legacy of which this planet has not yet decisively defeated as is so evident in Palestine, Kashmir, Burma, Africa, & Latin America. It can be cogently claimed that colonialism is being resurrected in the form of neoliberal & sweatshop economics. Inequality & exploitation is the nature of capitalism.

Zionism developed not as a liberation movement against colonialism but as a supremacist doctrine which yoked its destiny to colonial forces hoping to broker a Jewish-only country. Israel was forged with paramilitary death squads & is only maintained as a military fortress by substantial aid from the US & other countries. Zionism has proven itself a failed doctrine for ending the persecution of Jews–an eventuality foreseen & denounced by its critics, including Jewish activists who died in the holocaust.

Because of its military & political clientage, Zionism has grown to be a powerful political force around the world. Israel’s US lobbying group AIPAC is one part of that. Because Zionism is associated with white supremacy, racism, Islamophobia, colonialism, fascism, it has wide influence internationally. In the US, Zionists (Jewish, Christian evangelicals, atheists) are influential in anti-immigration groups, eugenics & population control groups, & elite circles within the women’s movement associated with the Democratic Party. There is no need to pull our punches in exposing the reactionary & racist role of Zionism in politics. But regrettably, many who focus only on AIPAC have made their polemics resonate with Hitler’s putrid assertion that Jewish bankers run the world. Jews don’t run this world nor do they control media. Because they were largely an urban people, they placed great value on education & many, including Zionist Jews, have achieved positions of power. That doesn’t mean they run the world.

We oppose Zionism & its monstrous colonial creation of Israel because it is supremacist, racist, colonialist based on ethnic cleansing, apartheid & militarism & not because its ideologues & citizens are Jewish. We stand with Jews against persecution & social hatred as we stand with all who are oppressed for who they are. That’s why we stand with Palestinians against Israel. Support the cultural & economic boycott of Israel. Check every label on products you buy to make certain its country of origin is not Israel or the settlements in the West Bank.

Photo is a Palestinian woman in Gaza where Israel which controls the water supply has made 95% of the water contaminated.