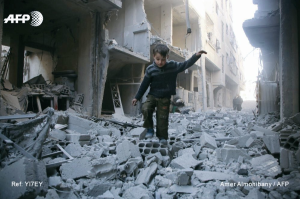 Between 500 & 600 civilians killed in Eastern Ghouta, 4,000 more injured, 2,000 homes destroyed. Most are living underground to protect themselves from Russian & Syrian bombers & artillery attacks. Assad propagandists & fellow travelers claim they are actors, terrorists, or human shields for terrorists. Of course, it they were any of those, why would it be necessary to carpet bomb cities to smithereens?

Take a principled, effective stand by demanding the immediate cessation of Syrian, Russian, & US bombing of civilians & the immediate, unconditional withdrawal of all foreign military forces from Syria.