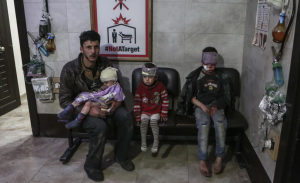 Whatever the Assadist defense for Russian & Syrian bombing of Eastern Ghouta, the reality is that they are carpet bombing an area with 400,000 civilians. There are no estimates of the casualty rate for paramilitary forces since they are not the primary target. Civilians are not “collateral damage” but the intended targets to destroy the revolution against Assad which is, for the most part, unarmed.

Contrary to Assadist propagandists who claim ‘everything we’ve been told about Syria is a lie’ & that the bodies of civilians are just Hollywood actors, there is an avalanche of photographic & video documentation for the bombing & artillery assaults on civilians in Syria. Just as there were thousands of videos documenting the Syrian revolution in 2011 which Assadists claim never happened. Erstwhile antiwar & socialist activist Jeff Mackler, in another of his regrettable screeds supporting the Assad dictatorship, actually claimed that the Syrian revolution “inadvertently provided the US with a pretext for the now seven-year US-orchestrated regime-change imperialist war.” So you see how they see things when they betray principles? It was those who rose up by the millions to oppose dictatorship that caused the Syrian war. May Mackler finish his decay in hell.

Photo is a man & his injured children waiting for medical care in a field hospital since so many of the hospitals & clinics have been bombed out.