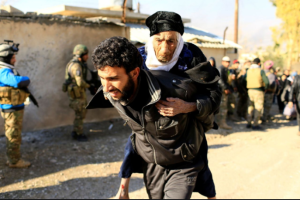 If there’s one thing made crystal clear in Syria, Iraq, & Yemen by all the military forces involved, it is that war is conducted against civilians to bring them to their knees. They are not just displaced victims but the targets. The news blackouts on wars elsewhere, like Afghanistan & Somalia, make that harder to understand.

When they speak of proxy wars as US strategy, they must be asked “what is proxy about tens of thousands of US airstrikes in several countries over years”? When they speak of Russian airstrikes over cities as defensive weapons against terrorists, how is that not Orwellian double-speak?

This man & elderly woman are fleeing bombing in Mosul, Iraq last Tuesday. Since October, when the US-led offensive began by 109,000 ground forces & aerial bombardment against 5,000 ISIS fighters in Mosul, nearly 126,000 Iraqis have fled. According to the UN refugee agency at least 2,300 are now fleeing daily & they expect 1.5 million will be displaced in a very short period of time.

The only principled antiwar demands are the immediate, unconditional withdrawal of all foreign military forces & operations: no military intervention of any kind by any country; stop the bombing.