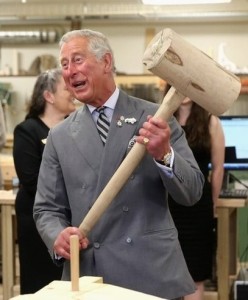 Is it still wrong to make fun of people even when they’re begging for it? Kanye West & Kardashian had to know there’d be some criticism when they tried to rent Versailles for their wedding venue. Donald Trump had to know his hair would be the only interesting thing about him to an Irish talk show host. Chuckles had to know he’d look dorky with a tool in his hand when he can’t even handle his own toothbrush. He was just this excited when he learned how to draw within the lines while visiting a kintergarten class last year.

Some say these observations are the things that concern small minds with an admitted mean streak when it comes to the elite. Is there a problem with that!? Some think it’s envy but take a look at this picture & try to argue that position.