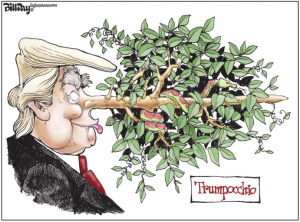 Chomsky, Tariq Ali, & Ajamu Baraka are among those who don’t get the importance of Trump’s associations with Russia & scoff at the investigation. Chomsky called it all “a joke” & defended Trump’s associations as diplomatic rapprochement & attempts to end US interference with Russia. Chomsky didn’t explain how lying & obstruction of justice fit into that scenario.

The US has been interfering with Russia since the revolution in 1917. There is an entire genre of literature based on spying between the US, Russia, & Eastern Europe & an industry based on Radio Free Europe. Of course, Russia interfered in the US elections in retaliation. That’s how competitive capitalist countries relate to each other & always have.

Electoral meddling is how politicians frame the issue but that is not what’s at stake for working people. What is at issue is Trump’s maneuverings with Russia to influence American politics in the same way & as condemnable as the Clintons used their foundation to peddle influence.

It isn’t about unearthing dirt on Trump’s sexual habits. No one has the stomach for that. It’s about unraveling & exposing the corruption in US politics & Trump’s probably illegal activities related to Russia that harm both Russian & American working people. Once the financial entanglements between Trump & Russia are exposed, we can understand the entanglements he has with other countries like India, the Philippines, Ireland, Scotland, & elsewhere that make him unsuitable to be president & expose the role of money in US electoral politics.

Whatever the motivations for this investigation to the Democratic Party, it serves democracy to know how corrupt electoral politics are & explains why the US is run by millionaires in their interests & not in ours.