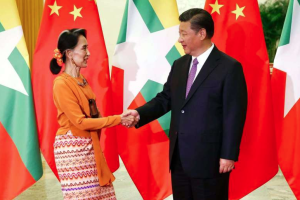 There’ve been many articles in political journals for a few years analyzing a deteriorating relationship between China & Burma. Maybe they should define deteriorating since they appear to use a different measurement than the rest of us. Or maybe they believed the fiction of a civilian government under Suu Kyi at odds with the fascist military junta. Even before Suu Kyi was elected to office she was running interference for a Chinese mining company in a joint venture project with the junta when villagers protested the environmental & cultural destruction.

Using the metric of foreign investment, China invested over $19 billion in Burma from 1988 to January 2017, including almost $3 billion in 2016 alone. That’s considerably more than any other country primarily because of economic sanctions for human rights crimes–a factor of no concern to China. Of course China now faces competition from several countries, not just the US, Europe, & Canada, but it’s way ahead in the game, especially in the extractive industries like mining & oil & gas exploration.

Using the metric of military aid, Chinese sales of aircraft, armored vehicles, naval vessels, & artillery dwarf every other country. The sole exception is missiles where Russia supplies more than double what China supplies. Once again, the advantage is due to military sanctions by the US, Europe, & Canada. So as long as the Rohingya genocide is an issue, China will maintain its military dominance. Which is likely one reason it’s such an ardent supporter of the junta & Suu Kyi.

Photo is Suu Kyi meeting with Chinese president Xi Jinping in Beijing on May 16, 2017.