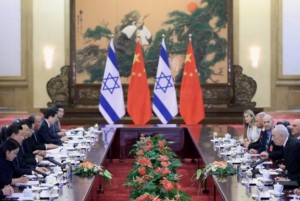 This is a photo of then Israeli president Shimon Peres at a state dinner in Beijing with Chinese President Xi Jinping in April 2014. This was not the first time Peres & other Israeli officials have been to China. Netanyahu visited in 2013 & several Chinese officials have made formal visits to Israel in a growing collaboration between the two countries, including between the Chinese & Israeli militaries.

The relationship between the People’s Republic of China (PRC) & Palestinians goes back to 1949 when the PRC was established under Mao Tse Tung but it’s shrouded in confusions–partially because analysts are often tendentious & partially because Chinese support for Palestinians appears to be mostly diplomatic lip-service. If China ever provided direct aid of any kind, it would likely have been made public & vociferously opposed by the US & Israel.

Originally the PRC refused to recognize the state of Israel because it was a colonial-settler project but by the early 1980s it was forging covert ties with Israel & formally recognized it in 1992. Chinese foreign policy is above all guided by realpolitik, not principles. It continues to make feeble objections to the worst of Israeli crimes, like the carpet bombing sieges of Gaza, but it blames the conflict on aggression from both sides. Positing the struggle as mutual aggressions between Israel & Hamas is a sneaky way of withholding unconditional support for Palestinian self-determination. Most relevantly, it is backhanded support for Israel.

In the past several years, corresponding with the emergence of the economic, cultural, & academic boycott of Israel (BDS), there is a qualitative turn in China’s relations with Israel. Instead of calling Israel a colonial project, China now refers to it as a “startup nation” & the Chinese ambassador to Israel wrote that “The friendship between the Chinese & Jewish nations dates back more than 1,000 years.” A remarkable feat since Israel has only been in existence for 68 years.

China has had military relations with Israel since the 1990s but sales of Israeli military arms & equipment, including anti-aircraft missile technology, were terminated by the US which perceived it as a threat since the US is building up military operations against China in the South China Sea. Of course, the question that remains unanswered is, why is the US giving billions in military aid to Israel when it is selling armaments around the world to repressive regimes? Why does it continue to need US military aid?

The bald facts are that China has become Israel’s third-largest trading partner & export destination with bilateral trade between the two countries worth USD$10 billion in 2013–up from about $50 million in 1992. China is second only to the US in joint high-tech projects with Israel & now surpasses Europe as a source of high-tech capital for Israel. The Chinese ambassador to Israel claims it’s because of Israel’s many cutting-edge technologies & China’s “interest in cooperation in the fields of agriculture, natural resources, environmental protection, education, & healthcare.”

If you go beyond the public relations baloney & examine what’s actually going on, China will stand accused of using its immense resources to counterbalance the growing international boycott of Israel–economically, culturally, & academically. That’s what the septic relationship between China & Israel is now all about–not cutting-edge technologies.

To counter the economic boycott, last January, China hosted not the first but the largest-ever China-Israel investment & technology conference attended by over 1,000 investors, businesspeople, & government officials from both countries. The conference was to organize Chinese investment in start-up firms & acquisition of Israeli companies. An Israeli investment firm estimated Chinese investment in Israel technology firms will exceed $10 billion within the next five years.

There are banner headlines in Israel declaring that Chinese investment in Israel tech firms are soaring. IVC Research Center in Tel Aviv estimates a 54% increase just from 2013 to 2014 & 30 new Chinese investors since 2012. They’re not just buying & investing in tech firms but cosmetic, food, agricultural, & medical firms.

In September 2015, a Chinese business conglomerate named Fosum bought a majority share in Israel’s Ahava Dead Sea minerals cosmetic company for $76.5 million. Ahava products are mostly sold at mall kiosks in the US, but a flagship store in London was forced to close due to BDS protests. The Ahava plant is located in the West Bank & because of BDS political pressure the company was considering a move to inside Israel. The Chinese purchase of controlling shares may be an attempt to do an end-run around BDS & obviate the relocation. It is anyway a flagrant flouting of the boycott against Israel although Ahava already had a distribution agreement with a Chinese company to market the product.

Last January, Israel also signed a research & development agreement with Hong Kong which will necessarily entail flouting the academic aspect of BDS because it involves Israel universities–as does the $300 million joint center between Tel Aviv University & Tsinghua University opened in 2014 to focus on medical & optics research–but mostly to defy the academic boycott of Israel.

The cultural boycott has not been slighted in this cooperation between Israel & China. They are attempting to massively increase tourism between the two countries by canceling visa requirements. A famous Chinese actor was designated Israel’s tourism ambassador to promote tourism to this ‘peaceful country with friendly people.’ (Except toward occupied Palestinians.) China is also orchestrating a deluge of performers, actors, circus clowns, dancers, musicians, artists to perform in Israel “as a symbol of fraternity, harmony & coexistence,” according to the Chinese ambassador to Israel. But mostly to undermine the cultural boycott of Israel.

One of the ugliest features of this new alliance between the two countries is that China & Israel are negotiating an agreement to send Chinese construction workers to the Golan Heights. The deal is being held up partially because China does not want them contracted to build Israeli settlements. Their scruples in this regard likely have more to do with international scandal & preventing BDS protests at their embassies. The outrage is that Israel is using foreign workers to replace Palestinian workers.

BDS activists cannot be daunted by the heavy weight of China aligning with Israeli apartheid & ethnic cleansing. China has its own political dissidents, especially in Hong Kong, & we should make every attempt to reach out to them to promote BDS.

Build & honor the economic, cultural, & academic boycott of Israel. Buy nothing with a barcode beginning 729. And consider protesting at Chinese embassies to protest their outrageous attempts to undermine BDS & Palestinian justice.