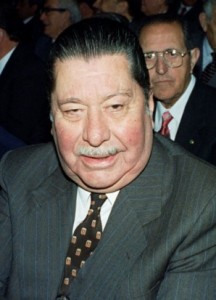 It is with a mixture of glee & regret that we report the death of Chilean General Sergio Arellano Stark, a chief architect of the September 11, 1973 coup against Salvador Allende that ushered in the reign of terror under General Augusto Pinochet.

Arellano is most notorious for organizing death squads, including one called the Caravan of Death, whose crimes & massacres of Chileans are too gruesome to describe.

Like all generals who achieve such heights of criminality–including Mubarak & Omar Suleiman of Egypt, Westmoreland & Schwarzkopf of the US, Ríos Montt of Guatemala, the six generals who led the 2009 coup in Honduras, & so many others (many of them trained at the US School of the Americas)–Arellano escaped justice in the courts, which in all cases are run by cohorts of the generalissimos. In an international pattern of injustice we are familiar with, he was found guilty of a few crimes out of hundreds but because of his advanced dementia was not required to serve prison time.

A forensic report on Arellano’s brain was done for the courts when he was trying to weasel out of jail time. It was concluded the combination of dementia with multifactorial Alzheimer led to mental derangement, including cognitive & psychotic disorders. He was also diagnosed with metabolic encephalopathies (a syndrome of overall brain dysfunction) & alcoholism. One could claim these were the very qualities which made him so effective as a general of death squads. But it’s also a possibility they were the direct consequence of his murderous, rightwing politics.

The glee is that he croaked; the regret is that he never answered to justice for his monstrous crimes against the people of Chile.

Good riddance to him.

(Photo of Arellano by Santiago Llanquin/AP)