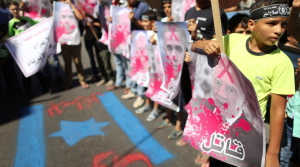 Mahmoud Abbas is being excoriated by Palestinians & others for not just attending but getting emotional & crying at the funeral of Shimon Peres. His grief may actually be real since Abbas owes his traitorous career to the 1993 Oslo Accords negotiated by Peres.

The Palestinian Authority (PA) which Abbas heads derives from the Accords which laid out the terms for Palestinian surrender of self-determination. They were always a bantustate solution & none criticized them more harshly nor more cogently than Edward Said. The PA functions as a mechanism in that betrayal. Abbas may see it coming that he will soon have to bend over & kiss his treacherous ass goodbye.

A photo of his disgraceful fawning over Peres’ corpse, next to Obama, Bill Clinton, & Netanyahu, is too contemptible to post when you consider the monstrous crimes Peres committed against Palestinians for the past 68 years.

Yesterday, these children in Gaza held an appropriate burial ceremony for Peres. They held up crossed posters of Peres, Obama, & Netanyahu before burning them during a rally. There is no sentimentality for an architect of Israeli colonialism, apartheid, & ethnic cleansing.