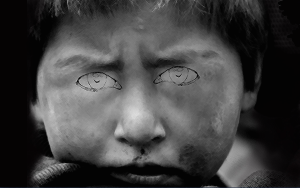 This is from a series of digital art by artist Masood Hussain done during the 2016 uprising in Kashmir when the Indian occupying army ran amok with the use of pellet guns–often injuring, totally or partially blinding, disfiguring children inside their homes in what has been called ‘directed stray bullets’. Over 7,330 were injured by pellets, causing lifelong health issues & emotional distress. The army continues to use pellet guns against unarmed protesters despite considerable international media coverage exposing the criminality. The Indian courts have denied legal action to ban pellet munitions as unnecessary force so it will take massive international opposition to help Kashmiris stop their barbaric use.