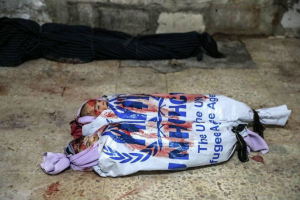 Shrouds for the children of Eastern Ghouta who Assad propagandists & their fellow travelers call actors, terrorists, or human shields for terrorists. There is no shame among fascists.

It was reported two days ago that the death rate in Eastern Ghouta from Russian & Syrian bombing was over 674 civilians, including children. May they Rest In Peace. Hamza Hassan, a surgeon who attends to the wounded, said “The situation on the ground is catastrophic. The regime is bombing hysterically”.

Stand with the people of Eastern Ghouta & demand the immediate cessation of Russian, Syrian, & US coalition bombing & the immediate, unconditional withdrawal of all foreign military forces from Syria.