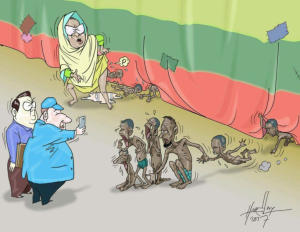 Ordinarily I don’t post racist caricatures because they’re all alike in imbecility & infantile social malice. But cartoons are a prominent genre for Burmese propagandists & supporters of the Rohingya genocide. Racist cartooning of Blacks, Chinese, & other nationalities was also the norm in the apartheid (Jim Crow) era in the US. Political cartooning is such a brilliant way to skewer tyrannous power that it is odious when used to humiliate the oppressed. Consider the incisiveness of Daumer compared to this halfwitted rubbish. That’s what happens when you use sarcasm to ridicule the oppressed rather than oppressors.

Who even knows what this piece of crap means except to insult–& show the stupidity of Burmese nationalists. Once again, Assadists & other fascists have joined with the political forces who support the Burmese military in conducting genocide against the Rohingya people. In politics there are no equivocations when it comes to genocide. Either one stands with the Rohingya people or one stands with fascism.