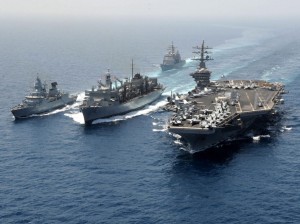 There is an alarming development that makes you question if neoliberalism hasn’t entered the Twilight Zone. NATO, one of the chief military forces involved in creating the refugee crisis from Syria & the Middle East, has ordered warships into the Aegean Sea to patrol the Turkish coast & stop the flow of refugees. They of course present it as thwarting criminal networks that smuggle refugees. Anyone willing to swallow that story might be too stupid to live, as the ineloquent so bluntly put it.

Sending warships against plastic dinghies? Is that how they stopped refugees from the African coast? Did they torpedo them? Rescue them? Turn them back? Is that the EU answer to the refugee crisis?

Ever since FRONTEX, the EU agency for policing immigration, started its military operation against refugees from the African coast last year, there’s been an almost complete news blackout. We know there are naval vessels from several European countries prowling the central Mediterranean in an operation described only in ambiguities. They claimed they were out to stop human traffickers but there was absolutely no elaboration of who these traffickers were. Were they fishermen trying to make extra bucks by helping people get to Spain or Italy? Or were they sophisticated criminal enterprises? How sophisticated do you have to be to provide plastic dinghies & rickety boats to refugees?

As the EU began to close down the corridor from Syria to Turkey to Greece, we again began to hear about those traffickers. Were they the guys selling plastic dinghies to refugees? But of course the trade would not exist at all if the EU were operating by international law & helping refugees flee safely from war zones. Instead of warships, they should long ago have sent ferries to transport refugees.

German Chancellor Angela Merkel is heading up the NATO military offensive in the Aegean against refugees. So now we know what she was negotiating in Turkey this week when she said she was “not just appalled but horrified” by the suffering caused by Russian bombing in Syria. Russian bombers, human smugglers, evil fairies from outer space all aligned against poor NATO & the European Union. Meanwhile, there are 50,000 people in a war zone at the Syrian-Turkish border unable to cross & unable to go back because of massive bombing.

NATO is a 28-nation military alliance headed by the US Pentagon. There isn’t a nation on this planet–particularly those 28 nations–where people should not be picketing & protesting the deployment of warships to stop refugees. Just when you think neoliberalism, the barbaric phase of capitalism, can’t get more savage, they prove their malice has inexhaustible sources fed by hell.

(Photo is the US NATO fleet from US Navy)