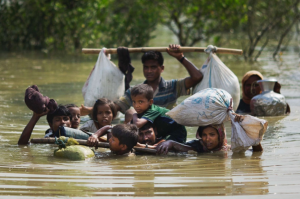 Human Rights Watch (HRW) is calling on the UN Security Council, a bastion of big power realpolitik, to impose an arms embargo & targeted sanctions on Burma. It’s something of an empty gesture since of the five countries on the UNSC with veto power (China, France, Russia, the UK & US), China & Russia are the biggest sellers of arms to Burma & are not going to impose an embargo or sanctions of any kind. They are steadfast in preventing the UNSC from even shaking the naughty finger at the generals, let alone issuing a condemnation for genocide.

As for those targeted sanctions, they really don’t amount to a hill of beans. It means some Burmese government & military officials will have travel restrictions & asset freezes imposed. Even if they were enforced, they would not bring the generals to their knees. The targeted sanctions thing is justified by saying it would hurt those in power & not affect Burmese working people. Quite frankly, it shouldn’t be an issue to put the squeeze on those who support the generals in carrying out genocide.

The HRW call is worth supporting just to put pressure on China, Russia, India, Israel, & the other countries supplying arms & military equipment to Burma. It also puts pressure on European countries playing military footsie with the generals despite the EU arms embargo. There’s nothing to stop us from demanding our governments impose sanctions against multinationals investing in Burma since billions of dollars are made off the backs of the Rohingya people as well as other oppressed nationalities in that prison house of nations. We can find out which companies based in our countries are invested there & picket the hell out of them. Somebody has to be held accountable for this genocide; no one should earn a dime from the deaths & diaspora of the Rohingya people.