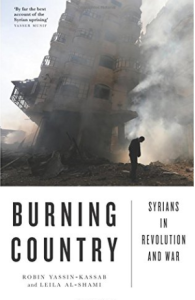 Syria is a complicated war. Too complicated for formulaic thinkers or those with an “attitude problem” toward the Middle East. It gets inexplicable if you won’t read a wide range of media sources because of silly-assed hysteria & Assadist alarmism that it’s all lies & if you read it you’ll get rabies or diphtheria or stop hating on Hillary or start supporting US regime change operations.

The scenario peddled by Assad propagandists & by some erstwhile progressives is that the only foreign military intervention that is destructive is US intervention which is on a regime change mission. According to this scenario, the primary method used by US forces to take down Assad is arming & training militias of the head-chopping kind. They insist that if you condemn Russian, Iranian & other military intervention, then you’re sanctioning US involvement & aiding & abetting those terrorists & they wind up supporting Russian bombing because Assad invited Putin to bomb civilians. Even socialists blither about Syrian national sovereignty instead of talking about the political character of the Assad regime.

In all of this, the 2011 popular uprising against Assad which was part of the Arab Spring, & for which there are mountains of video documentation, is denied like it never existed, or seen as long-since defeated, or portrayed as only represented by violent militias. Assad’s gulag is completely ignored & his dictatorship is dismissed with casual & contemptible asides like “Well Assad isn’t perfect but he’s better than those head-choppers.”

You can’t have a discussion about Syria if you don’t know the history or understand the character of the popular uprising. You cannot understand what is going on or where justice stands by reading only media from any source or, heaven forbid, only Assad propagandists.
I have just begun reading “Burning Country: Syrians in Revolution & War” by Robin Yassin-Kassab & Leila Al-Shami. I’m only on page 85 of a 225 page book. Just in those pages, it is absolutely invaluable to me. In comparison to anything I’ve read–& I’ve read a lot–it is monumental. It comes recommended by all who have read it among my FB friends including Yassin Al-Haj Saleh, a Syrian revolutionist active in the 2011 uprising, whose beloved wife & other political companions were disappeared by the Assad regime. He is also an invaluable writer for understanding revolution & war in Syria.

We’re in an important political battle against the emotional hold of propaganda & zombie politics over the question of Syria. It would be so valuable if those of my FB friends or others who have already read the book or are still reading it would comment about it or review it here to encourage others to read it.