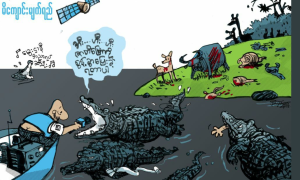 Anyone following Rohingya activists & Burmese dissidents on Twitter knows there is an army of Burmese nationalist cartoonists who besiege posts about the genocide & refugee crisis with racist caricatures of the Rohingya. Racism & caricature as low level & rancid as it gets. When Malala Yousafzai fearlessly called out Suu Kyi on the genocide, one Burmese cartoonist portrayed Yousafzai with poop for brains, a gruesome reference to her being shot in the head by the Taliban. Since there is no possible cogent defense of genocide, Burmese cartoonists seem to be playing a role way beyond their intellectual & artistic level, drawing from the cesspool where all such social hatred ferments. This is no form of satire, any more than Charlie Hebdo crap is; it’s just racism in all its putridity. Sarcasm which skewers the oppressed & supports tyranny is properly called propaganda, not satire.

This ugly-assed thing titled “Crocodile Tears” represents Rohingya refugees as crocodiles fleeing from animals they mutilated on shore toward a western journalist. The crocodile is saying “I had to flee my motherland” into the microphone. That’s a lowbrow attempt to discredit the testimony of refugees about the horrors they fled from in Arakan state & to suggest they are the genocidaires.

The cartoonist is a 58-year-old man-child whose pen name is Aw Pi Kyeh. He said, “We draw cartoons with a spirit that loves the country.” What he means is that their cartoons are intended to justify genocide & support a fascist regime.

As Burmese dissident in exile Maung Zarni once said, the strength of the junta is in widening the circle of enemies to the Rohingya people. We cannot let the lies & treacheries of that reactionary circle drown the voices of the Rohingya. Stand with them against genocide.

(This thing posted only for illustrative purposes.)