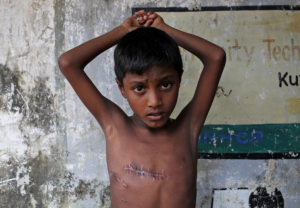 Burmese dissident Maung Zarni once said “What is really scary is the Burmese military’s attempt to expand the circle of enemies against the Rohingyas.” We are seeing that played out around the world where media, human rights NGOs, think tanks, UN officials, rightwing & fascist political forces are mobilizing to portray the Rohingya people as Saudi-backed terrorists.

This is 7-year-old Mohammed Shoaib who was shot in the chest by Burmese soldiers or death squads before crossing the border into Bangladesh. Keep this little guy in mind when you read the rubbish pouring out to vilify the Rohingya people. Since when is fighting terrorism about shooting little kids? Or is targeting children what the war on terror is really all about in Gaza, Kashmir, Burma, the Philippines, & elsewhere?