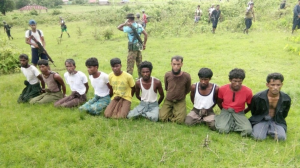 This disturbing photo is from the village of Inn Din in September 2017 when ten Rohingya men with their hands bound–fishermen, shop owners, high school students, & an Islamic teacher–were executed by Burmese paramilitary forces & buried in a mass grave. There are certainly hundreds of stories like this from the height of the genocidal onslaught in Arakan/Rakhine state but this instance became notorious when Burma arrested two Reuters journalists named Wa Lone & Kyaw Soe Oo while working on the story. The two reporters are accused of violating the Official Secrets Act & face several years in prison.

The Burmese government made a dog & pony show of justice by arresting seven of the soldiers implicated in the execution of the ten men. But it’s reported today that Burma’s new president Win Myint, an Aung San Suu Kyi ally who took office as president last month, has amnestied all seven soldiers. Their amnesty was sandwiched so no one would notice into an amnesty for 8,500 prisoners who were mostly drug offenders, those in ill health or aged. Fifty foreigners & 36 political prisoners were also released. It’s a far cry from the barbarity of jailing a person for drug addiction to jailing them for genocide. But what about Wa Lone & Kyaw Soe Oo? Why weren’t they included in the amnesty? Because the touted Suu Kyi civilian government considers genocide less an offense than exposing it.