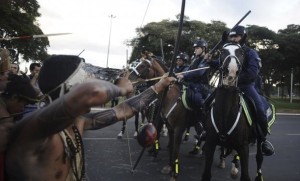 Collusion with neoliberalism is coming back to haunt president Dilma Rousseff & the oligarchs of Brazil in massive protests against the World Cup scheduled to start on June 12th & run to July 13th. Thousands of people continue to protest & tie up traffic in several cities & have already forced the cancellation of a World Cup ceremony in Brasilia; everybody from bus drivers to professors are striking or marching against austerity; the Homeless Worker’s movement has set up squatter encampments around the new multi-million dollar stadiums (because the games caused real estate prices to soar & forced low income families out of their homes); & Indigenous protestors (whose lands are being expropriated by agribusiness) are protesting both at government buildings & at stadiums.

600,000 well-heeled sports fans will be pouring into Brazil in just over a week & Rousseff has a mess on her hands. She’s employing the oligarch’s first line of defense: massive squadrons of riot police with tear gas. Now frantic against the protesters, she promises the squatters they will receive low-cost government housing if they move. She’ll resort to her campaign promises or if necessary, promises of socialism if they don’t move soon. But if all else fails, her back-up plan is federal troops ‘to protect the safety of the sports fans’.

There are twelve stadiums being built in Brazil for the World Cups. According to city auditors, Brasilia’s stadium alone cost 1.9 billion reals (that’s a staggering $849.26 million or £500 million)–in a country where the poorest 34% receive less than 1.2% of the nation’s income; in a country with one of the highest child homeless rates in the world & with millions living in slums.

Media is reporting this is the first time Indigenous people have joined the anti-austerity protests that began last summer 2013. In fact, there is photographic documentation showing they have been involved from the beginning. It can even be said they inspired the protests by refusing to leave Maracana Village (in March 2013), an abandoned natural history museum in Rio de Janeiro near a stadium which the government wanted demolished to make room for swanky shopping malls for game attendees.

Here Indios with bows & arrows confront mounted police with tear gas grenades in Brasilia at an anti-austerity protest on May 27th. International solidarity with the Indio’s just demands can obliterate any disparity in fire power.