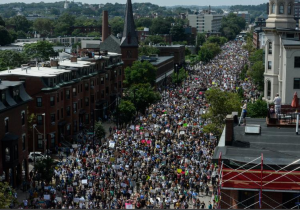 This is the rally in Boston, MA on August 19th in response to the fascist & white supremacist show of force in Charlottesville. Media, which always lowballs the number of protesters, estimated a crowd of 40,000. It may have been double that.

What’s significant about this march is that Boston is one of the most segregated cities in the US & in the 1970s had outright violence against Black children over the desegregation of public schools. When I lived there after 1978, even public pools were segregated. I was repeatedly threatened with violence at my workplace for socializing with Black co-workers; I was unable to have breakfast or walk down the street with any after our night shift finished for fear we would be assaulted. I was once stopped in my car by a policeman who told me to turn around since I was driving into the Black neighborhood & would be in danger when I had often done door-to-door political work there without a single incident.

Things have changed in Boston & around the country since the 1970s & since the decline of the antiwar movement. This anti-fascist mobilization along with the thousands who rallied in several cities in every state show the potential for rebuilding a massive antiwar movement that yokes the struggle against racism in this country to the racism of US wars–an uncompromised movement that makes no exception for Syrian & Russian bombing of civilians. Given Trump’s plans for escalation of war in Afghanistan, we have no alternative.