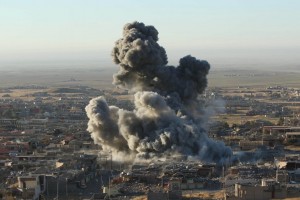 This is Sinjar, a city in northern Iraq near the Syrian border–reportedly a stronghold of ISIS for the past year & a-half & now under bombing siege by “US-led forces” & a land assault by Kurdish forces. One only hopes US bombers are coordinating with Kurdish ground forces. That cannot be assumed.

So now the questions begin because the story isn’t adding up. First of all, who’s arming ISIS with all that heavy equipment? How are they delivering it? Shouldn’t they find the supply routes & shut them down? Just how damn big is ISIS? Here we thought it was a paramilitary force & now it turns out they’re like a small nation armed to the teeth.

We’re told ISIS is a “Wahhabi & Salafi jihadist extremist terrorist group.” So why is Saudi Arabia bombing them? We’re told it has strongholds in Libya & Afghanistan. How did that happen under US-NATO occupation? And last but not least, what happened to Al-Qaeda? Have they outworn their usefulness to the US? So many questions; so few answers. So much Pentagon treachery.

The most imperative political responsibility of our generation is to rebuild the international antiwar movement to put an end to these monstrous wars.

US out of Afghanistan, Iraq, Syria, Yemen, Pakistan, & everywhere else it is.